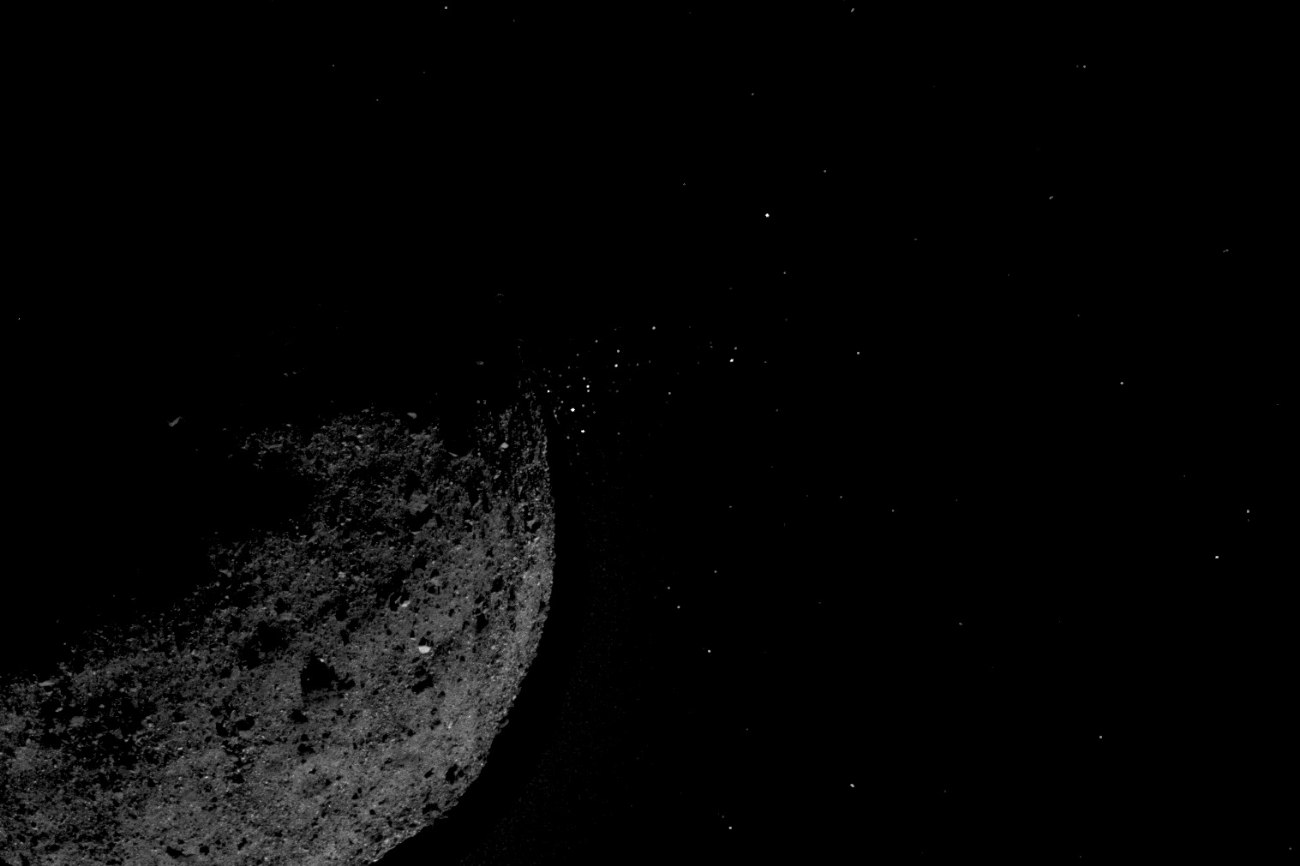 Every day, thousands of small rocks — dust grain- to pebble-sized — cross paths with Earth’s atmosphere and burn up. More organized collisions, known as meteor showers, are visible to us when the planet passes through whole clouds of rocky debris.

These fragments were long thought to come strictly from comets whose crusts had been heated by the Sun and cracked open. But early in 2019, NASA’s OSIRIS-Rex spacecraft (short for Origins, Spectral Interpretation, Resource Identification, and Security-Regolith Explorer) captured images from the near-Earth asteroid Bennu that flipped that line of thinking on its head.

The images showed small bits of rock launching off the asteroid’s surface. Some of the rock fell back to the surface and some went into orbit around Bennu for several days, but about 30 percent was ejected with enough speed that its pieces escaped the asteroid’s gravity and began to orbit around the Sun.

“This was surprising,” says Robert Melikyan, a graduate student at the University of Arizona’s Lunar and Planetary Laboratory. “Bennu doesn’t have a lot of volatile material that can heat up and break up the way comets do.”

Melikyan and a team of researchers modeled the evolution of the asteroid’s dust cloud in a study published in the Journal of Geophysical Research: Planets earlier this year and found that the particles both spread out around Bennu’s orbit and follow a similar elliptical path around the Sun.

To explain what was happening, scientists considered that the Sun also bakes Bennu’s rocky surface much like it does a comet. The rocks there experience the full force of that heat for about two hours, then cool down as Bennu completes its rotation and faces the cold vacuum of space, says Melikyan.

This large range of temperatures is believed to cause stresses and fractures that break Bennu’s rocks with enough force to eject some of them off the surface. In addition, scientists speculate that the very small grains of meteorites that hit the asteroid’s surface on a regular basis and at high speeds also send many of these fractured pieces aloft.

“The chance that these particles will brush up against Earth’s atmosphere is quite high [in the] next century when Bennu’s orbit is predicted to be closer to Earth,” Melikyan says. His team modeled Bennu’s orbit to a high degree of accuracy for the years between 1788 and 2135. The simulation shows that the first particle will brush against Earth’s atmosphere in the year 2101. Around 2130 and onwards, the model shows a significant increase in meteor showers, with the largest predicted to happen on September 24, 2182.

The authors of the study note that even the 2182 shower would be rather underwhelming, says Andrew Rivkin, a planetary astronomer at the Johns Hopkins University Applied Physics Laboratory who was not involved with the study. “However, the particles would be rather large compared to typical meteors, so they would probably produce impressive fireballs if they were observed,” Rivkin says.

The best vantage point for the “2182 Melikyan Storm” (mark it in your calendar now!) will be from the southern region of South Africa, where a person might be able to see up to 140 meteors over a one-hour period, says Melikyan.

Today, the Geminid and Quadrantid meteor showers are the only major meteor showers that could potentially come from asteroids; it’s possible that their sources are asteroid-like comets instead. “Astronomers have generally classified asteroids and comets as fundamentally different for most of the last few hundred years,” Rivkin says. “But we’ve come to the realization over the past decade or so that at least some objects straddle the line between them.”

Like Bennu, other asteroids could cause meteor showers if they get close to the Sun, where temperature swings can break their rocks and form clouds of debris. Of course, the farther away asteroids are from Earth, the better. But if they do get close enough and eject small rocky materials, the resulting meteor showers could be a nice way to see material from asteroids that once orbited in the belt of space between Mars and Jupiter — or even beyond.

“The possibility for this type of activity on near-Earth asteroid Apophis during its close approach in 2029 could produce a very beautiful meteor shower,” Melikyan says.

In the meantime, there’s still a lot to learn about asteroids. “There is a lot of diversity in asteroids and unexpected processes going on that we don’t fully understand,” Rivkin says. “Learning that Bennu was ejecting material was a huge surprise, but we don’t yet have enough data to know how common that behavior is.”

Sun Nov 14 , 2021
Invest time in unpaid advertising and marketing strategies to boost what you are promoting. WEB OPTIMIZATION companies assist to make sure that a web site is accessible to a search engine and improves the possibilities that the site will likely be discovered and ranked highly by the search engine. WEBSITE […]

Thank You Cards For Business